Villa Bologna has been described as ‘perhaps the finest privately owned 18th-century country house in all of Malta’.

It was built in 1745 by Fabrizio Grech as a wedding present for his daughter Maria Theresa Grech and Nicola Perdicomati Bologna, who were married in April of that year. Fabrizio Grech was a senior advisor, or Uditore, to Grand Master Pinto and from that position derived significant influence and wealth. When the marriage was announced society mocked the Uditore for having wealth but no class and not even a decent family home. Not one to be snubbed, Grech built the villa for his daughter so as to silence his critics. He certainly succeeded: classified as a Grade 1 National Monument, Villa Bologna is as impressive now as it must have been when it was first revealed in the 1740s.

In the 1890s Villa Bologna was inherited by Sir Gerald Strickland – arguably one of Malta’s greatest politicians. He was certainly unique, having been elected both an MP in the UK House of Commons and the Prime Minister of Malta.

His first wife and the mother of his children was Lady Edeline Sackville West, daughter of the Earl De La Warr, whose family lived at Knole in Kent, rumoured to be England’s largest stately home. She died in 1919 and Lord Strickland remarried Margaret Hulton. 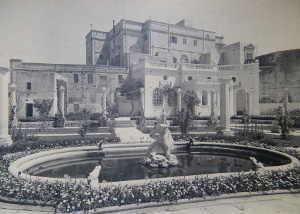 Margaret Hulton was an extremely wealthy English publishing heiress of Picture Post fame. She spent much of her time in Malta and lavished her wealth on the island through her philanthropy and her extensive work at Villa Bologna. She was a very keen gardener and designed new gardens at the back of the villa. These magical gardens have a distinct turn-of-the century character. Italian elegance and English restraint combine in a series of terraced gardens with immaculate lawns, a unique dolphin fountain, a sunken pond and vine-covered pergolas.

At the end of the garden lay the old stables, which were converted into a pottery workshop in the 1950s. The pottery still produces a small number of classic pieces today, which are sold at the shop and also at a small number of shops across the island. 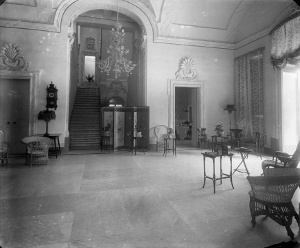 The Villa is now the home of Gerald de Trafford, Lord Strickland’s grandson. In 2009 his son, Jasper de Trafford, moved back to Malta to take over the management of the estate. A regeneration project was launched and European Union funding secured in 2012.

Works have now been completed on the restoration of the fountains in the baroque garden. This project seeks to make Villa Bologna financially sustainable through cultural events and tourist visits that showcase Malta’s rich cultural, social and architectural history.

Quite Interesting: During WWII, a German pilot landed in the garden. It was a Sunday but Lady Strickland’s head gardener had popped in to check on the animals and, as he approached, noticed a large crowd of villagers gathered outside the walls. The gardener eventually spotted the pilot in a tree, hanging from his parachute. He helped him down and locked him in a room at the far end of the garden, next to the private garden of San Anton Palace, with the intention of handing him over to the authorities the next day. The pilot escaped and leapt over the wall into the hands of a bunch of angry farmers who were keen to have revenge. According to the history books, they did get revenge, and the pilot was never seen again.